#TeaLizard from A Public Relations Perspective

It was quite the week for “Good Morning America” and their social media channels. On the morning of June 21st, a tweet from GMA’s official twitter account went viral. After The Cleveland Cavaliers won the NBA championship, LeBron James was photographed in tears. GMA asked the Twitter world if the candid would become a famous meme, alongside other “greats” such as #CryingJordan, #Smockin, and #TeaLizard. 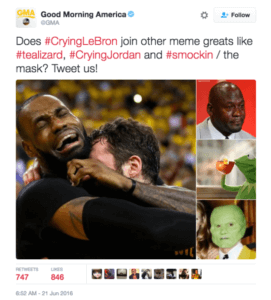 Damn, back at it again with a social media misstep! It didn’t take long for people to jump on the tweet, especially GMA’s use of #TeaLizard, used in reference to the 2014 meme of Kermit the Frog sipping Lipton Tea.

Once you’re able to look past the fact that GMA made a mistake, there are many lessons that public relations professionals can learn from this social media failure.

With a 24-hour news cycle and the rising prevalence of social media, it’s more important than ever to do research and be aware of ongoing trends. If more precaution was taken before hitting “tweet”, this entire situation could have been avoided. GMA’s message consisted of three once-viral photos, meaning that the probability of someone catching a potential mistake was high. Engaging in current trends like memes can be a great way to interact with your followers or bring more attention to your message, but those efforts will fall flat if it’s clear that no research has been done prior to jumping on the bandwagon. Even without learning too much about the meme’s history, it wouldn’t have taken more than a quick Google search to uncover the fact that Kermit the Frog is, in fact, a frog.

GMA was obviously in the wrong here and responded in possibly the best way they could (other than building a time machine and going back to the moment before the tweet was sent): they embraced their mistake. After they responded with several more tweets and even had Kermit himself speak out on the issue, suddenly the huge audience was no longer laughing at them– but laughing with them. Their transparency brought them more viewers, followers, and engagements. If they had decided to react in a different way, denying their mistake or simply pretending it didn’t happen and ignoring the situation, it’s likely they would have been shamed, mocked or lost a plethora of fans.

Everyone in the PR game has heard, “there’s no such thing as bad publicity.” While it may be a myth, GMA has taught us that you’re better off creating positive news from the negative instead of trying to wait out the storm. GMA responded to their failure properly. From their misstep, new memes were created, publicity was earned for the beloved Kermit, #tealizard was trending; of course, a good laugh was had by all.

Good Morning America’s situation can help prepare those in the PR world for the next viral photo or video to come our way. As PR professionals, we must keep our finger on the pulse of public opinion and rising trends. #TeaLizard may have stolen #CryingLeBron’s viral spotlight but hey, it’s Cleveland’s first NBA title and I’m sure he’s happy regardless.

For those that aren’t public relations professionals or aspiring to be, there is still an important lesson to be learned here: the difference between a lizard and a frog.

Jillian Curcio is a Public Relations Associate at Flackable, a national financial public relations and digital marketing agency supporting the communications needs of financial advisors and other forward-thinking financial services firms. Follow Jillian on Twitter. Connect with Jillian on LinkedIn.