Do you want to be the very best, like no one ever was? If so, then you’re probably one of the 7.5 million people who have downloaded the Pokémon Go app since its launch last Wednesday.

The app, a location-based augmented reality game that allows you to catch virtual Pokémon in the real world, has experienced a tremendous start since its release in the United States. Pokémon Go has captivated mobile users of all ages across the globe, quickly becoming a cultural phenomenon.

Just a week old, the game is already generating an estimated $1.6 million in revenue per day. Benefitting from this instant success is Nintendo, parent to The Pokémon Company, which has already seen a 25 percent increase in stock shares and added nearly $11 billion to its market value.

The popularity of Pokémon Go and clear potential for profit has not only opened the door for Nintendo’s success, but has become a tool for Pokémon-inspired marketing by food and retail businesses. The format of the game encourages users to explore their real-world cities to find in-game Pokémon, PokéStops or Gyms, which can be found at actual landmarks and local businesses. This alone is a valuable marketing tool that can result in rising visits and an increase in foot traffic for any organization hoping to convert locals who want to play into customers willing to pay.

Some establishments have already realized the marketing potential of the virtual Pokémon in the real world. By flaunting ties with the game, Main Street businesses have been able to set themselves up for an increase in recognition, popularity or profit.

Storefronts have found a number of ways to engage with the traveling hordes of Pokémon trainers. One of the most popular methods of capitalizing on the app’s hype is to place Lure Modules at PokéStops at or near a business’ location. A Lure Module is a well-recognized in-game feature that allows users to attract Pokémon to a certain area. While the Lure Modules were designed to bring in Pokémon, they’ve become known to bring in just as many gamers. 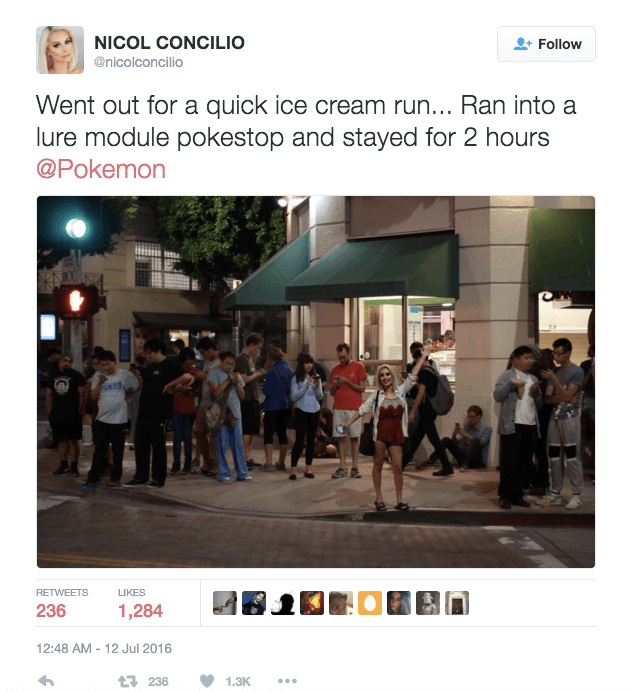 Utilizing this tool is a great way for a retail business to attract potential customers to its location. Once gamers are lured in (ha!), stores have taken “PokéMarketing” a step further by offering tailored discounts and promotions.

These strategies are just the start of what is sure to become a more prevalent marketing approach as the app rolls out in more countries, evolves over time and inspires copycats. Bringing an entire generation’s childhood nostalgia into the modern age of augmented reality gaming is unlike anything we’ve ever seen before. While this level of popularity can be fleeting, Pokémon has retained its status as a recognizable and well-loved brand since 1996. With the game’s technological sophistication and promise of added, advanced features – in-game chat functions, head-to-head battles, Pokémon trading, etc. – there doesn’t seem to be an end to Pokémon Go’s success anytime soon.