Last month, Flackable announced Andrea Mazzola’s promotion to account executive. This announcement followed her one-year anniversary with the agency in January. To celebrate these milestones, today’s Flackable Spotlight features Andrea and her journey to becoming a high-performing public relations professional at Flackable.

Born in Philadelphia and raised in New Jersey, Andrea Mazzola attended vocational Gloucester County Institute of Technology, located in Sewell, New Jersey, where she studied Finance and Business Management. After graduating from Gloucester County Institute of Technology with her NOCTI Certification, Mazzola moved north and continued her education at Rutgers University. She entered the university in the School of Arts and Sciences as an English major, and later, during her sophomore year, additionally entered into the School of Communication and Information majoring in Communication with a specialization in Public Relations.

On top of her dual degree, Mazzola found time to get involved in other aspects of university life. She joined Zeta Tau Alpha fraternity her first year of college and subsequently joined her sorority’s executive committee the following year.

Mazzola began her first internship her second year of college and totaled four different internships throughout her three years at Rutgers University. Mazzola’s most memorable internship experiences include Power of the Patient Project and NJ Sharing Network.

Although Mazzola was kept busy during her college years between her English and Communication degree, sorority and internships, she managed to graduate in only three years, obtaining a B.A. degree in 2018 at just 20 years old. “It took a lot of motivation, organization and sacrifices, but graduating a year early was one of the most rewarding decisions I’ve ever made,” says Mazzola.

One month after graduating, Mazzola moved back to Central Jersey and began her career at Johnson & Johnson as a communications administrator consultant. A few of her responsibilities included writing newsletters and updates to the company’s distribution list, creating presentations and tutorials using Microsoft Sway, managing and organizing employee data and formulating employee flow charts.

At the start of 2019, Mazzola moved back to her hometown outside of Philadelphia and began her journey at Flackable as an assistant account coordinator. 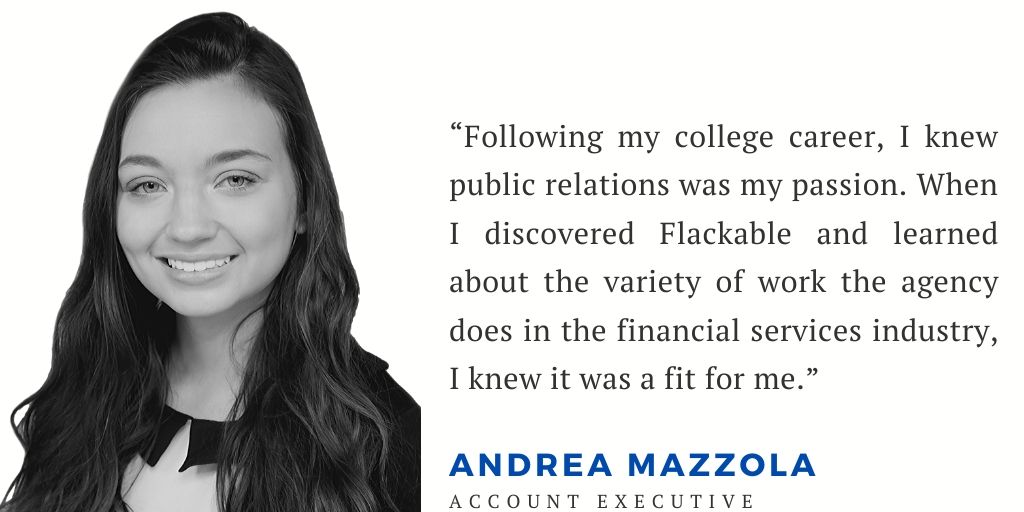 “Launching my public relations career with Flackable was such an exciting time for me,” said Mazzola. “Following my college career, I knew public relations was my passion. When I discovered Flackable and learned about the variety of work the agency does in the financial services industry, I knew it was a fit for me.”

Mazzola started out supporting public relations and content development efforts on behalf of the agency’s growing client base. “The work structure at Flackable is a combination of independence paired with accountability. In a short amount of time, I grew my public relations knowledge and skills and really learned how to work with urgency and purpose,” said Mazzola.

Soon after her initial hire, Mazzola was promoted to the account coordinator role, and a few months later, to assistant account executive. One year later, Mazzola, is driving big results for Flackable’s clients as an account executive.

“It’s been a proud experience watching Andie grow and steadily heighten her own performance goals over the past year,” said Brian Hart, founder and president at Flackable. “We’re excited to watch her continue reaching new individual achievements while exceeding client expectations.”

Outside of Flackable, Mazzola is a certified yoga instructor, completing her 200-hour yoga alliance certification last summer. Mazzola is a vinyasa instructor, teaching at local New Jersey studios and gyms such as Seeds of Love Yoga and LA Fitness. In the future, Mazzola hopes to expand her practice and specialize in yin and restorative teachings.